If you are a Korean drama fan, you will know just how much food figures in Korean society. Almost any K-drama will include some food place where protagonists meet, kiss, lament, gorge themselves, battle, conjecture, drink themselves silly, you get the picture …So, while we aren’t exactly K-drama fans, we would still like to share some photos of the K-eats we had in Seoul that left an indelible impression on us:-

We managed to hunt this branch down in one of the Myeongdong alleys. This is in the same building as McDonald’s at street level & Statbucks upstairs. The restaurant is on the 5th floor. As a famous galbi jjim (braised beef short ribs) joint, it certainly lived up to its name. The medium portion was more than enough to feed us 3 ladies. Side dishes of mandoo, cold spicy noodles were good accompaniments. Beef broth came in a teapot which go into cups. The flavourful beef ribs were fall-off-the-bone. Savoury and sweet at the same time, my only complaint is that there did not seem to be enough sauce to eat with rice. It was so good that we wanted to come back the next day to takeaway for our flight home ;).

This is what we came for!

Side orders of refreshing cold noodles

Scissors not really needed as meat was fall-off-the-bone!

This is nourishing, wholesome and healthy stuff. A whole spring chicken is stuffed with glutinous rice, garlic, assorted beans and boiled with ginseng in a stone pot. It is really chicken soup for the soul and at Tosokchon, they keep it pure with no MSG or other flavourings (so er yes, it is a bit bland but you can add salt). We walked here after gawking at the changing of the guards at Gyeongbokgung Palace. Just in time too, before the queues started building up for lunch.

For those who wish to have a less healthy meal, the roast chicken is an alternative

I understand that in K-dramas, Korean BBQ restaurants are where the main characters go to when they get a treat or have a celebration. While some may think the sound of sizzling meat and a smokey atmosphere may be romantic, actually the lingering smell of BBQ on your clothes will render most of these experiences anything but. However, we like our meat and the beef in both these restaurants were commendable. The servers will BBQ and cut the meats for you so no need to do anything except to stare longingly until everything is done and placed on your plate.

the good stuff!! Check out the marbling! 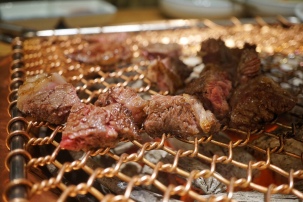 Servers will bbq for you to ensure you don’t burn your meat! 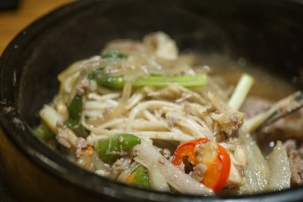 Some other noodle stuff we ordered

Do it like in the K-dramas – clink those Soju glasses! 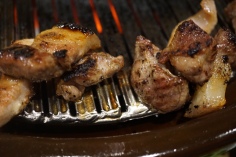 craved bibimbap so had to order it here ..

Many countries have their own rendition of shaved ice desserts like ice kacang in Singapore and Malaysia, kakigori in Japan and in Korea, they have patbingsu. So IMHO, the Korean version is a lot more hip, happening and daring in terms of the stuff that they put on and in it. The portions are also HUGE so unless you are a brain-freeze fanatic and want to shovel all that sweetened ice down by yourself, do share with one or two friends.

So in Korean, dak is chicken and we have been wanting to try Dak Galbi in Korea for the longest time. Yoogane is a chain dak galbi joint that has been around for a while so when we passed this outlet in Myeongdong, we naturally gravitated towards it to get our spice-fix. The servers will mix everything in the big pan in front of you and you can order additional stuff like tteokbokki (rice sticks), ramyeon, rice or cheese. These are also seafood and non-spicy options.

*Note: many reviews in Google Maps that alluded to rude staff. Guess we were lucky to encounter friendlier servers when we were there in April 2017.

Kwangjang Market for Mandus (and more …)

Korean markets are wonderful for exploratory eats because there is just so much variety in them! Sure, they are crowded and you will have to jostle your way through, be shouted at by vendors and figure out just what some of the stuff on sale are. But it is all part of the fun. We dropped in on Kwangjang Market for breakfast as it is one of the nearest markets to our hotel, the Ninetree Premier Hotel Myeongdong 2 and easily accessible by train.

Join the hordes of people in the morning, tourists and locals all in there!

So much to look at! 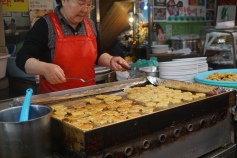 Hand-made noodles by a friendly ahjumma

mountains of mandu at the same noodle stall

we came here for this!

Freshly fried doughnut worth waiting for! It was awesome!!

Do you have great Seoul food recommendations? Do drop us a note in the comments box then so that we can check them out when we next venture to Korea 😉